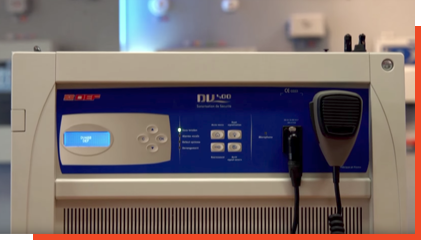 Normally referred to as the Central Element of the Vocal Fire Alarm System (ECSAV), the security PA system (SSS) can be associated with a fire safety system, especially to meet the requirements and evacuation obligations of certain sites.

The SSS offers two main functions: the first is to authorise, following a command from the Alarm Management Unit (UGA) of the SSI, a broadcast of the evacuation alarm, in a sequence alternating between the NFS 32001 sound signal and spoken message, in French or in English. Voice messages specify the instructions, reassure listeners, and rationalise their behaviour in the face of danger.

The second function is the comfort PA system: thanks to its dedicated inputs, for the broadcast of background music, animations via a UHF microphone, or the possibility of sending pre-recorded messages.

The DEF SSI is associated with a range of Speakers (HP), each of which is intended for a targeted application such as offices, retail spaces, parks, etc. PPMS (Individual Security Plan) – Given the state of emergency declared by the government, schools are subject to the obligation to set up an alert plan. The SSS proposed by DEF include the PPMS function, which includes 4 customisable messages: attack, natural disaster, containment and evacuation.